Since time immemorial, India has always been a country of tourist attraction. First, it is endowed with natural panorama encompassing a diversified set of topography and geography – mountains (snow-clad and otherwise), plains, seas, rivers, waterfalls, deserts, etc. Second, India’s status as a multi-cultural and multi-lingual country and yet being peaceful whets curiosity among all to increasingly explore the country. As a corollary to this and thirdly, the country is home to architectural magnificence of a spectrum of historical monuments dating from the ancient to modern times. Fourth, India is relatively cheap in terms of cost of living that gives more value for money to all tourists. Fifth, the growing and fast industrializing nation provides considerable opportunity for business tourism. So is the case for wellness tourism; in fact, India has emerged as the destination for ayurvedic and yogic healing. Sixth, the varied wildlife including flora and fauna is distinctly alluring. Seventh, being a multi-faith abode, it is a destination for religious tourism. Last but not least, its governance based on well-respected democratic principles acts as a catalyst.

As an economic activity, tourism contributes to both income augmentation and employment generation. Charts 1 and 2 illustrate these two aspects for the five-year period 2014-15 to 2018-19 (latest available).

Based on data from Ministry of Tourism Annual Report, 2020-21.

The contribution of tourism to GDP – both direct and indirect – reflected a declining trend. For 2017-18 and 2018-19 each, it remained unchanged at five percent. On the employment front, its contribution, by and large, moved up – over the five years, but by just 81 bps. The indirect employment contribution was higher, and it moved faster than its direct counterpart. 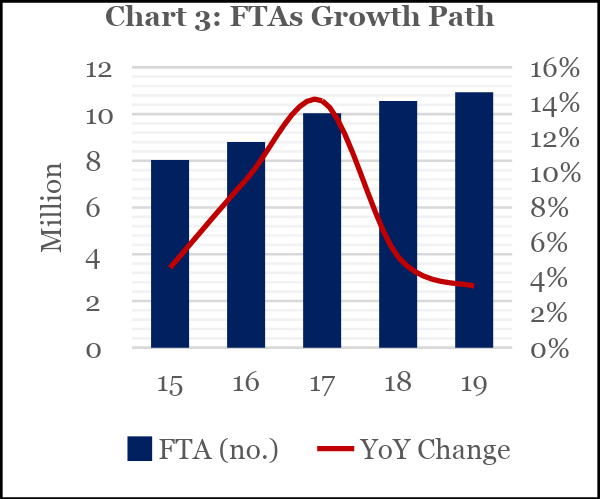 During 2015-19, FTAs increased at a Compound Annual Growth Rate (CAGR) of eight percent. Moreover, the YoY growth initially rose for three years peaking at 14.1% in 2017, but fell drastically in the subsequent two years.

The existence of seasonality in FTAs is evident from Chart 4. By and large, April to September is the lean period and October to December is the rush period, which tapers off from January onwards. During 2018, while the six-month period April to September accounted for a little over four-tenth of the total FTAs, the three-month period October to December alone accounted for almost three-tenth. The share of FTAs during January to March remained below 30%.

The seasonality is explained by (a) April to September which constitutes the summer and rainy seasons in India and (b) October to December is severe winter in the western hemisphere besides being the holiday season. It is also noteworthy that almost every month in 2019 witnessed higher FTAs compared to the corresponding month in the previous year. Obviously, the seasonality in FTAs was replicated in the foreign exchange earnings.

International tourism yields foreign exchange (forex) to a country. From the perspective of our country, forex is extremely valuable. Chart 5 presents the growth path of forex earnings during 2015-19.

During 2015-19, the forex earnings from tourism grew consistently at a CAGR of 9.4%. It needs to be mentioned here that, the prevailing exchange rate of INR vis-à-vis the currencies of the originating countries of the tourists in different years also matter. Forex earnings per FTA also reflected an almost continuous increase.

Dr. Manas R. Das is a former senior economist of State Bank of India. He has over 30 years of experience as an economist in two large commercial banks. Academically, he is a gold medalist in Bachelor of Arts with Economics Honours from Utkal University, followed by Master’s in Economics from Delhi School of Economics and Doctorate in Economics from Gokhale Institute of Politics and Economics. He is also a Certified Associate of the Indian Institute of Bankers. He has won several awards, besides being a prolific writer.

Congress White Paper Is Like Filling Gold In Mouth Of Decay!

Let’s Remember The Ones Whom We Have Lost & Thank ‘HIM’ That, We Are Alive!

PM’s invite to leaders for all-party meeting on June 24: Centre to unfold its roadmap on Kashmir